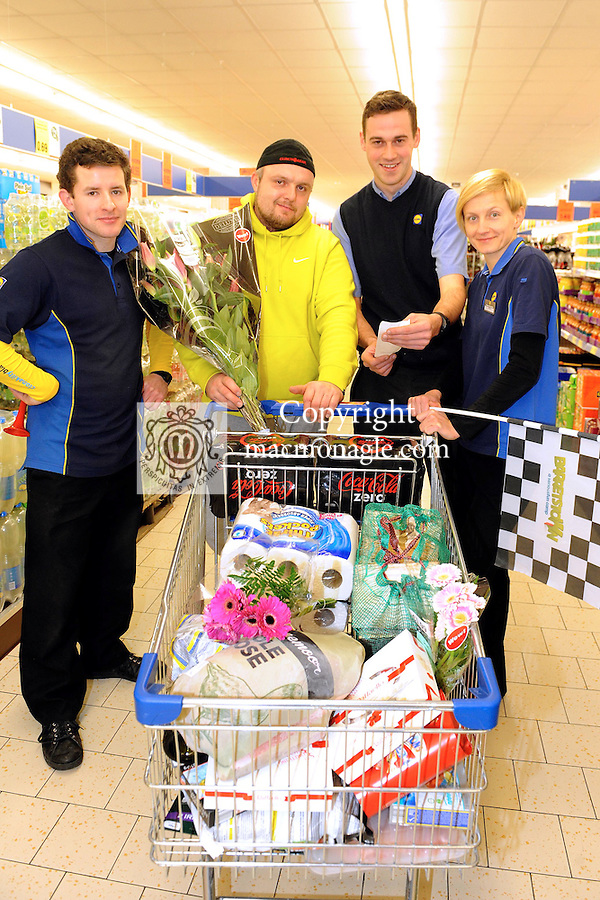 lidl trolley dash killarney-00006.JPG
Pictured at the Christmas Trolley Dash in Lidl Killarney is David Paweloszek, with Paudie O'Keeffe, Store Assisitant Manager and Sales Assistants Denis Keane and Anna Wlodarczyk when he was one of the lucky 141 winners of the nationwide Lidl Trolley Dash, which took place Saturday 13th December in every Lidl store across the country. As well as winning their Christmas shopping for free(the average of goods won per person totalled €350), each winner also contributed to the whopping €135,438 which was raised from ticket sales in just 2 short weeks. A total of €6,145 was raised in Kerry alone.
Speaking about Lidl’s Christmas trolley dash, Sinead Flynn, CSR assistant with Lidl Ireland, said: “We are thrilled with the result of our Christmas fundraising initiatives for our Charity partner Barretstown. In two short weeks, Lidl stores across the country have raised over €135,000 from one initiative alone. We would like to thank all of our customers who have supported Barretstown through these initiatives and look forward to ramping up our activities in 2015 to raise even more much needed funds for Barretstown."

This year, Lidl also hosted its Christmas Markets in Dublin and Limerick for the first year ever. Visits to Santa cost €8 and rides on the carousel were €2 per person, with all funds raised going to Barretstown. Barretstown Christmas cards are also on sale in all stores nationwide. In excess of 25,000 units have sold to date, and Barretstown Christmas cards will be available in store for the remainder of the festive season. This brings the total of funds raised by the retailer to a whopping €185,594 through its Christmas fundraising activity for its charity partner, Barretstown, in just six short weeks, with still nine days to go until Christmas.