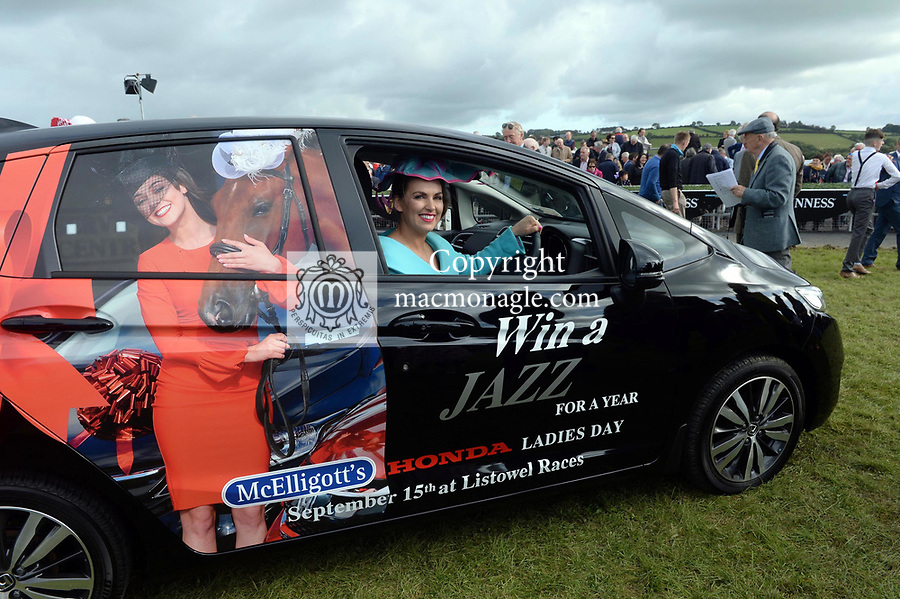 listowel races ladies day 2017-124.jpg
Jill Duggan from Killarney who won the McElligott's Honda Best Dressed Lady at Listowel Races on Friday. Her prize includes a cheque for 3,000 euro and the use of a Honda Jazz car for 1 year.
Photo: Don MacMonagle

Jill Duggan, from Killarney, was declared the overall winner of the McElligotts Honda Ladies Day, at the Listowel Harvest Racing Festival (Friday 15th of September), scooping the first prize of a stylish Honda Jazz for a year plus a cheque for €3,000. Jill wore a Heidi Higgins turquoise dress, with a headpiece from MacBees Killarney. First runner up was Joann Murphy from Kilgarvan in a stylish two piece by Tina Griffin with matching Carol Kennelly headpiece, and received a cheque for €1,000. 2nd runner up was Mary Kelliher from Killorglin, who wore a fitted red dress from MacBees in Killarney and a headpiece by Carol Kennelly and received a cheque for €500. Judges were Ireland’s top TV personalities Daithi O’Se and Maura Derrane assisted by Kerry footballer and McElligott’s ambassador Dave Moran. Huge crowds enjoyed the warm September sunshine at the penultimate day of the harvest festival at Listowel Races.