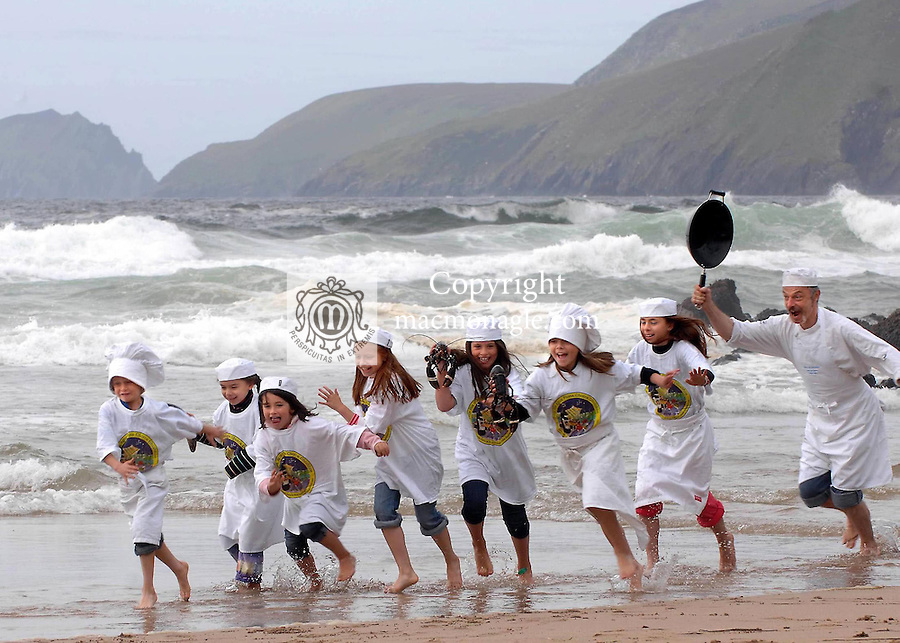 macmonagle00022.jpg
31-8-09WEST KERRY: "Gimme back my fish"l aughs chef Jean marie Vaireaux as he chases children, Ella Greely, Natasha Vaireaux, Margot Vaireaux, Jack brick, Hanna and Rachel Rubinstein, Ciara Brick and Faye Greely across Coomeenole Strand in West kerry at the launch of the 2009 Blas na hEireann Food Awards which will take place in Dingle County Kerry Oct 2-4th.
Picture by Don MacMonagle
Now in its second year, these Awards attracted over 800 product entries from 300 producers throughout the country, North and South, in 2008. The Blas Awards are the only Irish food awards that focus solely on taste, arguably the most important criteria for a food product, and the judging standards are the most rigorous in the country. Winners are chosen as a result of blind tastings where like products are pitched against each other in a battle to tickle the tastebuds of the country’s top food experts. This year there are 30 categories for producers to enter, ranging from cheese and chocolate to ice cream and black pudding. The winners of each category will then do battle for the prestigious title of overall Producer of the Year 2009. Winners will be announced on the 2nd October as part of the hugely successful Dingle Peninsula Food & Drink Festival www.dinglefood.com , which will include a special expo of all Gold, Silver and Bronze winners for buyers, press and the general public.
Don MacMonagle